If I am in a wandering mood, I often head up the old road, into the valley above my Sit Spot. It has just enough human traffic in the summer to keep the mud puddles in good shape. In the winter it is used by snowmobiles. It’s about 3/4 of a mile of great four-season tracking, in part because of the substrate, but mostly because the larger animals use it like a freeway.

At the bottom end, it runs through a large horse field. Coyotes and deer travel down the road to feed in the fields. A stream runs down one side of the road alternating between small rapids and beaver ponds. Moose and raccoons often cross the road or travel a ways to gain access to the water. Small logging roads lead off the other side of the road, petering out into thousands of acres of mixed woods. Bobcat and red fox travel up and down the road. Often in the winter, the otters travel the stream sliding up and down the brook between ponds.

In the early winter last year I found an unusual number of coyote trails on the lower end of the road. I followed them along a strip of balsam fir trees between the horse field and one of the beaver ponds where I found the remains of a cow that had been dumped over the horse farm fence. They had gnawed the skull almost clean but the weather had been hovering around zero and the rest of the mass was frozen solid, making it hard for the coyotes to get much from it. Over the next few months, the coyotes came back for more with each thaw. 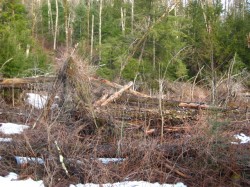 One day in late March the coyotes changed how they accessed the cow remains. Instead of staying under the evergreen cover, their trails went across the beaver dam, straight across the snowmobile trail, and into the woods. About a half-mile in the woods there is a 3-4 acre area where all the trees blew over about 10 years ago. This area gets heavy usage by coyotes and bobcats especially. A few years ago I found a fresh coyote bed under a blown down tree there and it is the only place I have ever heard coyote howls come from around here. I usually steer clear in respect for these animals but this time I decided to follow and investigate.

After about a 1/4 mile the trails came to a smaller wet area with several blown down maples. The trails went right up to one of the large, snow covered root-balls, then in and out of the trench in the snow along the horizontal trunk. I was sure I had come upon another coyote resting area. Though the wind was crosswise to my travel, the Crusty Moon lived up to its name making each step a loud crunch so I assumed that the coyotes would be long gone. I poked my head in where the coyote had explored but no bed. I kept looking around where another coyote trail had circled the site.

Then I peeked into a hole formed by a fork in a branch at snow level. I saw a large brown eye staring back at me from 18″ away. It had a tan muzzle with veins winding their way across and a small, sunken divot in front of the eye.  Just from that one eye, I could feel the intensity of the stare. All of this was taken in during a second while I glanced in, did a double-take, then jumped back. I considered looking again for a moment but turned and walked to the edge of the clearing. Even though I had been following coyote trails, my gut feeling when I saw the brown eye was deer. But there were no deer trails there or anywhere nearby when I circumnavigated the area from a distance. I became sure that I had looked a denned black bear in the eye. 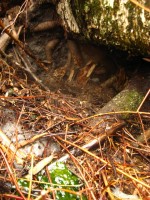 A month later when I went back to investigate I found a cozy hollow tucked against the root ball, about four feet below where my boots had been during the previous visit. I also found a mucus-covered dark bear scat—probably the “plug”—and several slimy, watery electric green scats of similar volume. Then, a few days later, I was in the horse farm field and got to watch a bear sky-lined, climbing around in the top of a tall hardwood tree on the ridge top. I never could find the tree or figure out if it was the same bear or find the answers to the pile of other questions that came up. But I will keep following coyotes—they always seem to lead me to interesting places.

As an aside—I just read “Among the Bears: Raising Orphaned Cubs in the Wild” by Benjamin Kilham. If you want to read more first hand black bear stories I recommend it.

Lucian Avery is a 2010 WAS graduate and blacksmith from Vermont.