The morning was gray, and the group was full of tension and excitement. It was day one of the CyberTracker Track & Sign Evaluation with Mark Elbroch, one of the first in North America. So, perhaps it’s not surprising that I was a little on edge. At the three forks of the Snoqualmie River in North Bend, WA, 10 of us were being evaluated, and we were gathered at the edge of some cottonwoods along a sandbar, just a few questions into the test. The first questions were easy, an elk track, the tracks of three deer walking together, and a large splayed canine track. Mark showed us the three stations first, and then we had to go back to each of them on our own and decide on our answer and then tell him what it was.

The elk track was a relief. The tracks of elk and other ungulates are unmistakable, and the tracks of adult elk are easily distinguished by their size from those of deer. One down. The next question was harder—it was clear that they were deer tracks, but the question was not “What?”, but “How Many?”. Where Mark had circled the tracks, I really couldn’t tell—there were lots of tracks one on top of the other, and it felt impossible. However, when I trailed the animals back, it was clear that three individuals came together, funneling through a gap in the cottonwood saplings. 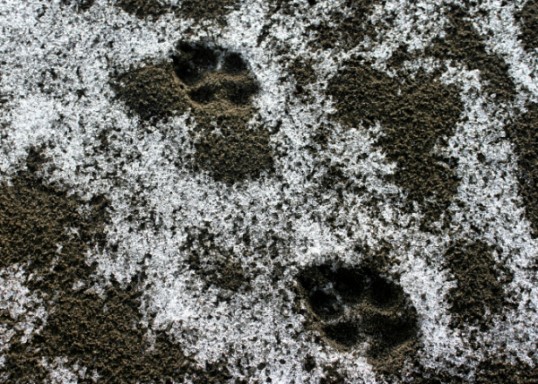 I was feeling pretty good. So, when I got to the next station, I took just a quick glance at the ground and then went over to Mark to give him my answer. “Domestic dog.” Next please. So, I was a little horrified when, at the end of the day, Mark told us that the answer to question number three was, actually, mountain lion tracks. I went over and looked at the tracks, one of the few questions I had missed, but impacting my score more because it was an “easy” question. And, indeed, they were clearly mountain lion tracks. 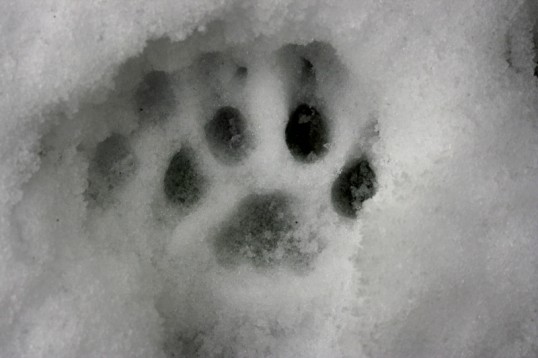 So what had happened?? Well, I glanced at the tracks, took in the basics (size, number of toes, etc.) and the context (sandbar near a road, where people and their dogs spend a lot of time) and jumped to a conclusion. I did not look closely at the spacing or arrangement of the toes, the overall shape of the track (although it was a little bit skewed because of the deep sand substrate—the one thing that helped me to feel better about my mistake), the shape of the heel pad, or for claws or lack thereof.

Had I looked more closely at these things, I would have really known which animal left the tracks as opposed to just assuming that I knew. There are some things about dog tracks and mountain lion tracks that are similar. For instance, they both have four toes that register, they both have a heel pad, and they can be similar in size (depending on the breed of dog). Here are the things I would have seen that would help me make the distinction:

Toe Arrangement: Mountain lion tracks are asymmetrical, while a dog track is fairly symmetrical. Mountain lions and other felines have four toes that register, the same way dogs and other canines do. However, a feline track can be easily distinguished from a canine track by the outside toe (equivalent to the human pinky) being “lower” or further back in the track than the inside toe (equivalent to the human index finger). Dogs and other canines can be identified by their tracks because the outside toe is roughly even with the inside toe, and the two middle toes are also fairly even (actually, one will be slightly further forward than the other, but in canines, this is subtle, whereas with felines it is pretty obvious).

Presence or Absence of Claws: Both dogs and mountain lions have claws, but claws don’t always show up in tracks! The claws of dogs and other canines are relatively large and blunt, so they show up in tracks fairly easily. Mountain lions, however, have claws that are retractable, as do all felines. These claws are not usually unsheathed and so they rarely show in tracks. They do occasionally show when tracks are in deep substrates, such as mud or snow.

So, there are significant differences between dog tracks and mountain lion tracks, and these differences apply to the tracks of canines and felines in general. Once one knows these differences and has seen them in a variety of contexts (differently aged tracks, different substrates, etc) it should be fairly easy to distinguish them without error. So the real lesson here is to always stop and actually look at the tracks you are identifying! Especially on a CyberTracker Evaluation!

To see the next CyberTracker Evaluation hosted by Wilderness Awareness School, click here.