Our Immersion class has done some amazing things this past month, but I wanted to specifically share with you about two exciting areas we’ve recently been learning and practicing.

We spent time analyzing each print while noting the differences in each, with the intention of deciphering the age of each print. I loved getting down close to the tracks and looking for things like broken or bent foliage, creases in leaves, and dirt particles. It was great practice in awareness and seeing deeply in a way few people have an opportunity to. I didn’t think I’d be able to see much information in the tracks, but after some great instruction on what to look for, I found I could see a wide range of clues and evidence.

We then went out into the forest to practice trailing. After breaking up into small groups, one member from each was elected to walk 100 paces into the forest from the trail. After they returned, we as a group practiced the “Find Every Track” exercise. This entails getting down on hands and knees, with our eyes inches from the ground as we try to find each and every step our group member made. It may not seem that tough from my description, but in the wet, soggy duff that is the forest floor of western Washington, it was HARD. We only found maybe 4 or 5 of his tracks in an hour. Again, this practice helped me to deepen my awareness and focus. 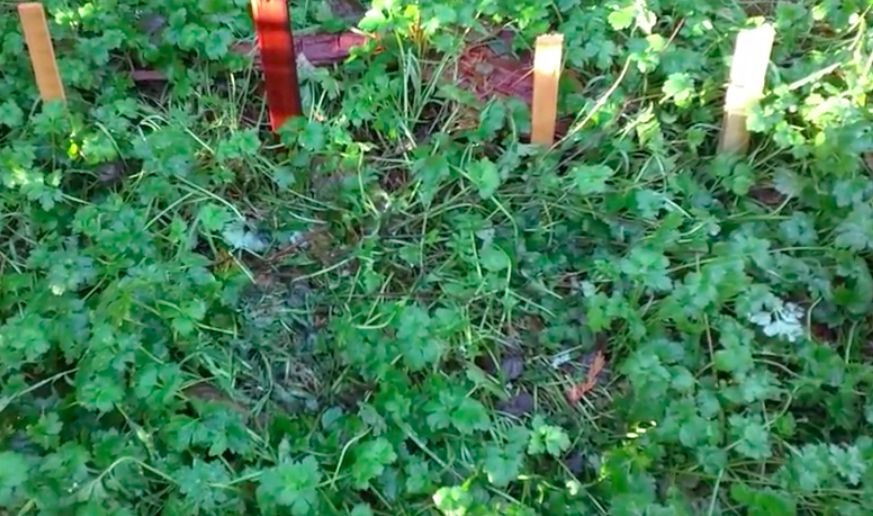 Another interesting dynamic was doing this process with a group of 3 other people. One of us might feel strongly that we saw a track in one location, while another person would discover another nearby spot that they thought was a track. Then, as a group, we’d have to deliberate over both spots to come to a consensus on which we thought it was. I found it required a high level of non-attachment and trust in my group members to do this exercise effectively.

I had to look at the evidence without becoming attached to my own point of view, or pride over having found that particular track. I also had to trust my group member when they said they saw something else, which I couldn’t see in that moment. When I trusted their vision and judgment, I could release my previously held belief and look with fresh eyes at what they were seeing. It was a powerful exercise in being someone who can work effectively in a group, and allow the power and awareness of multiple points of view to benefit the whole.

We finished out the day with another fun trailing exercise, in which another group member would climb a moderately steep hill (fun fact: it’s easier to find tracks when traveling uphill) for a few hundred yards, while the rest of us had our backs turned and couldn’t watch. After a signal from our instructor, our group set off in search of our lone group member, who in this exercise was our “prey.”

We practiced the “Tracking Formation” during the exercise, where one member is the point person, who is in front and pointing out the tracks. The second member is the guard, who stands guard over the last confirmed track, in case the point person can’t find another track, they can come back to the last confirmed to get their bearings again. The remaining member(s) of the group are responsible for a more heads-up perspective.

They are looking further down the trail for the actual prey, while also monitoring all around for other predators or threats.

It was really fun to move silently through the forest as a coordinated unit, using nothing but hand signals to communicate as we tracked down our prey. We got stuck a few times, which is usually when we rotated positions, allowing a new point person’s fresh eyes to notice what the previous person may have missed. We got within a hundred feet or so of our prey when our instructor called time, but we had followed his trail perfectly!

I was surprised at the wealth of information available to my senses during these exercises. The more I practice skills like tracking and trailing, along with all of the other sensory practices in this program, I was amazed at how much information is out there, which most of us completely miss. There are so many stories and events laying in plain sight, all we have to do is hone our awareness so that we can pick up on the sometimes very subtle clues.

Another day, we learned about sketching and casting animal tracks in plaster. We had a great guest instructor Mark, who is an art teacher and amazing tracker. We spent the first half of the day learning and practicing sketching techniques to help us in sketching our animal tracks. The second half of the day we went out into the field by the Tolt river to find and cast tracks in plaster.

It was really beneficial to develop my sketching abilities, mainly because I haven’t practiced those kinds of skills since sometime in grade school. I think I took some major ground in being able to recreate what I see onto paper. Even more beneficial, is how by simply sketching a track onto paper, I am able to ingrain that information in such a deep way that I can recall it later. The next time I come upon an animal track that I’ve previously sketched, I will be much more likely to recognize it quickly.

Our outdoor cooking day has probably been one of my favorite days so far in this program. While I’m not someone who cooks a lot, I love to barbecue and cook outside, so this day was bound to be interesting for me. We started by breaking up into our clans and building our fire. We needed it nice and hot with lots of coals for the purposes of cooking. We chopped a lot of wood, hung a tarp to protect our fire and our food from the rain, and we prepared the coal bed for cooking.

Interspersed among our work, we were periodically called back to the central fire for cooking demonstrations by our instructors and apprentices. We were taught how to spit roast a cornish game hen, bake an apple crisp in a dutch oven, bake a trout in clay, make eggs inside little onion bowls set into the coals, and cook ground beef as well as “ash cakes” right on the coals.

After each demonstration, we would mimic the technique at our own fire with the food provided. The best part of the day was eating all of the amazing food we learned to make. Delicious! If you’ve ever enjoyed a meal while camping and mused to yourself about how food just tastes better when you cook and eat it outside in nature, then you have an idea of what it’s like to prepare food in these primitive ways. There is something about cooking on an open fire or over a coal bed that just feels right. My ancestral “food-prep” DNA stretched its arms and legs after lying dormant for so long. It’s one thing to intellectually understand that humans have cooked in these ways since we’ve mastered fire all the way up until fairly recently, and it’s another to actually feel it in your body as you work the fire, chop wood and taste the flavors of each course. I look forward to practicing these techniques in the future. I’m especially excited about leaving a lot of cooking equipment home the next time I go camping or backpacking!