“Got the trail?” I called. “Yup!” another voice rang out, clear in the white stillness of a snowy forest above a stream ravine. It was a chilly Friday morning at Wilderness Awareness School’s high school program, Community School. Four of us—two instructors and two young women—had fallen into a rhythm as we followed the deteriorating trail of an unknown animal. The girl in the lead would call out, pointing to the last footprint she could see. The second student would make sure to stand by that distinct track, as the lead moved ahead and as both scanned for more tracks in the distance. “I see some further up!” the lead would say, and we’d all skip to that point. As we moved further into the forest, I could collectively feel all our eyes and minds focus, our bodies become more alert—perhaps even stronger. It was as if each second of trailing was transforming us.

“What is this animal?” we all wondered. At first it looked like deer, then it morphed into canine…or was it feline? It had walked slowly, methodically, at one point scrambling over a tangle of branches, leaving a single distinct claw mark on one. We lost the trail twice but carefully sent out wings on either side of the lead to make a big circle—and we found the trail again. When we came to a huge downed tree suspended about three feet off the ground, we found perhaps the most exciting part of the trail: the animal had hopped onto the tree, walked along it for about thirty feet, disappeared in the shelter beneath it, emerged in the snow another 60 feet away, and sat down just before stepping onto a narrow human footpath. Yes, it had to be a bobcat! 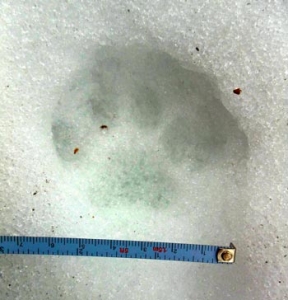 The tracks we saw that morning displayed all the characteristics of a classic feline print. We almost confused them with coyote or domestic dog tracks, but luckily we knew the key differences:

As far as size, a good rule of thumb for felines is the 1-2-3 rule: housecat tracks are typically one inch in diameter, bobcats are two, and mountain lions are three.

Also look for the pattern of tracks—a bobcat tends to move in a direct register walk, where the hind feet land directly on top of the front feet, or an overstep walk, in which each side’s hind foot registers just in front of the corresponding front foot.

Though bobcats spent much of their time resting, that does not make them lazy. Rather, they are masters of conservation. They will rest often and take refuge from bad weather in small places that have good views—such as under a log or rock ledge on a hillside. East coast tracker Paul Rezendes tells a story about trailing a bobcat one winter day. After discovering two of its lays, he scrambled up a steep rocky hill covered with mountain laurel. The tracks led directly into a barely noticeable nine-inch cave opening. From the tracks and hairs and depressions, it was obvious that the animal was denning in the cave, laying out front, and traveling to and fro often.

What Goes In Must Come Out

Bobcats, like other cats, are true carnivores—unlike dogs and bears, they turn up their noses at yummy berries or garden veggies. Thus their scats are almost always some combination of the meat and fur of the rodents and rabbits they’ve been feasting on, which makes the scats difficult to pull apart. Bones in cat scats tend to be more ground up and processed than those in dog scats. Bobcat scats are typically segmented and ½ to 1″ in diameter. 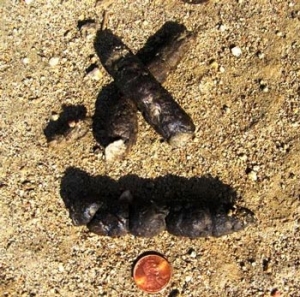 Bobcats often prepare a spot to defecate in by scraping at the ground. Sometimes they scrape to cover their scat as well. Bobcats will also create scent mounds by creating a small 6″ tall mound and spraying backward on it. Bobcat urine has that distinctive smell that housecat urine has as well.

The End of the Bobcat’s Tale…

By the time we rejoined the rest of Community School at the end of the day, the four of us were hungry, achey-eyed, and our mouths were tired from grinning. We hadn’t encountered the animal—we knew from the beginning that the trail was too old for that. But we had gotten a taste of that exhilaration that happens when walking the same path as a wild creature, pausing when we thought it paused, glancing where we thought it glanced. We had placed our fingers in the divets made by that bobcat’s feet, and touched the same snow that it did. We had crawled under branches and blue sky, over logs and moist, cool earth, and felt a different part of our brains and spirits engage. Just another normal high school class day…