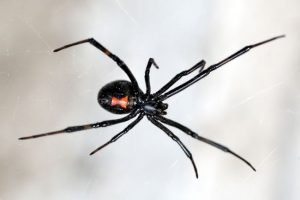 When considering venomous spiders and spider identification, the first one that comes to mind is the Black Widow. In North America, there are around five species of the Black Widow spider. You can easily identify the black widow, especially the female, because of it’s round, bulbous belly.

The female Black Widow is a nocturnal and likes hiding in dark hidden places. The spider measures 1.3 centimeters to 3.8 centimeters long, about the size of a quarter. You can also see a red hourglass on its belly, though it is not found on all members of the species. The hourglass may also be orange in color or come as a stripe, a dot, or a series of dots. These will occur according to the age of the spider and its location.

The Black Widow weaves a web that is irregular in shape and is normally referred to as a drunken web. As much as it is irregular, the web is known to be the strongest of all silk and is most often found near the ground.

Though the venom of this spider is too little to be diluted by the body of the human, a bite will lead to a large swelling around the bitten region and may also cause the victim to experience muscle ache, nausea and even breathing difficulties. 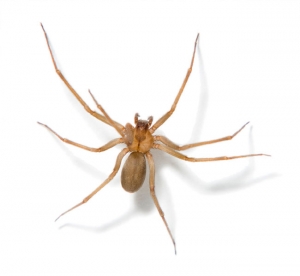 After the Black Widow, the Brown Recluse is the most notorious of venomous spiders. It has the potential to be dangerous to humans because it is found around houses and other buildings.

The Brown Recluse spider is often found hiding in dark places like under fallen trees, rocks, and in garages and basements. It normally builds an irregular web that looks like sheets and also has a small shelter that is made from a disorganized set of threads of silk.

This spider is also called the “Fiddleback” or “Violin Back” and can be identified by the marking on its head and back which resembles a violin. The neck on the shape of the violin points towards its back. The violin mark is not visible for all the spiders, and you should not wholesomely rely on this fact to make your judgment. The belly of the recluse is uniformly colored and looks like a long circle.

Most commonly the brown recluse spider is brown in color though it can also be tan, light brown, or even whitish in color. The Brown Recluse has 6 eyes as compared to the normal 8 eyes found on most spiders. The eyes are arranged in pairs of two, with two of them in the median part while two are found laterally.

If bitten by the Brown Recluse spider, the area around the bite will experience intense pain. 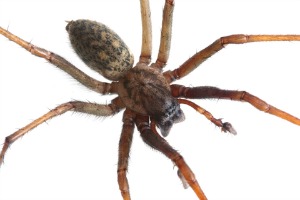 The Hobo Spider is large and brown in color. A distinctive feature of the Hobo Spider is the pattern of yellow markings that are found on its abdomen. Many of the common spiders have dark bands on their legs but this is missing on this spider. Identifying this species has been known to be quite difficult.

They build funnel webs in cracks, holes, and crevices so that they can capture their prey. These webs are often found in retaining walls, building foundations, stacks of wood, and collections of bricks.

The Hobo Spider can also be found indoors between discarded or stored boxes, window sills, near warm places, behind furniture, and also in closets. These spiders are not climbers but can run very fast. A Hobo Spider doesn’t attack unless they are provoked or attacked.

Treatment if you suspect you have been bitten by one of these venomous spiders:

1. Clean the bite area with soap and water.

2. If the bite is on an arm or a leg, use a bandage or handkerchief tied snugly around the appendage above the bite and elevate to help slow the spread of the venom. Be sure it is not so tight as to cut off circulation.

4. Seek medical attention as treatment with anti-venom or medication may be necessary.