I pulled my nose a bit closer to the bone dry, deeply fissured clay and squinted slightly in an attempt to get a better look at the tracks that lay before me as the sun reflected off the clay into my eyes. Jonah Evans, a veteran wildlife tracker and biologist with the Texas Parks and Wildlife, knelt beside me as did Michelle Van Naerssen, a graduate of the Wilderness Awareness School’s Nature Instructor Training program and Wildlife Tracking Intensive. The tracks were clearly imprinted in the clay that had since dried to the solidity of a concrete sidewalk. I immediately recognized that the tracks were from a species that I was not familiar with and the thought of this introduction excited me.  I zeroed in on one of the front feet as Jonah pointed out that the toes made a very neat ark across the top of the foot and that long claws were registering well beyond. We followed the animal’s trail for a bit through the broken clay, as it lumbered along in an overstep walk toward the Rio Grande River which lay about 50 yards to the South.

Jonah, Michelle, and I were in Big Bend National Park scouting expeditions for the Way of the Pathfinder and Wildlife Tracking Intensive programs at Earth Native Wilderness School which were scheduled to begin several days later. The national park is vast, stretching out over a significant portion of west Texas along the Rio Grande covering over 800,000 acres. One of the wildest and remote places left in the continental United States, Big Bend lies in the North Easterly corner of the immense Chihuahuan Desert which sprawls out across northern Mexico and the United States’ desert Southwest. As the lead instructor at Earth Native Wilderness School, I originally felt drawn to bring students to this place by its sheer wildness and the fact that the wildlife tracking here was some of the most incredible in the country. There are not many places left in the lower 48 states that remain largely unaltered by the colonization of North America by European settlers; Big Bend is such a place. 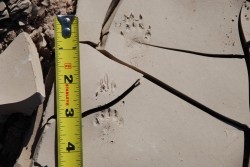 The task of locating the best clear print tracking areas in the park for Earth Native’s programs was a big one and we were lucky to have Jonah around to help out. A resident of nearby Alpine, Texas, Jonah is very familiar with the park and its tracking areas. It did not surprise me at all that many of the locations that he had pointed out to me on the map weeks earlier were right along the Rio Grande River, for water is one of a tracker’s most valued elements. Some of the connections between wildlife tracking and water are obvious; most animals must drink at some point and therefore, streams, rivers, ponds and lakes become hotbeds of animal activity especially in arid regions where water is scarce. Traveling a step farther from the obvious, all vegetation requires water to sustain life and most animals use vegetation for food and shelter from the elements. But perhaps even more importantly to a wildlife tracker, water when combined with most soil substrates acts as both a softener and a glue, making the ground pliable enough to catch the tracks of passing creatures and yet stiff enough to hold tracks long enough for a skilled tracker to decipher the stories that they hold. One can easily envision the effects of water on the creation of tracks by picturing in your mind tracks made in wet and dry sand. As many of us, wildlife trackers and non-wildlife trackers alike, have experienced, wet sand will hold the details of tracks quite well where tracks made in dry sand erode significantly the moment the foot is removed. 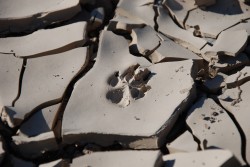 These connections could not be more relevant to the Chihuahuan Desert. To the animals that call this place home, water is the most valuable resource of all. Due to the lack of recent significant rainfall the clay upon which we were tracking was so hard that the only creatures that were currently registering tracks upon its surface were the Mexican cattle and horses that had wandered across the Rio Grande looking for patches of lush vegetation along the river for grazing. We knew that the lumbering tracks that we were following were old and asked Jonah if he knew the date of the last significant rain. He only shrugged at the question and said that even though he lived a mere hour away the weather patterns in the Chihuahuan were very localized and that he didn’t have a clue. After Jonah’s answer trailed off, there was a moment of silence as we all gazed upward at the crisp blue sky that seemed to stretch on forever. There was not a cloud in sight. 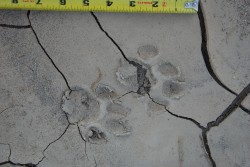 We spent several hours that day along the river. We didn’t venture more than a hundred yards or so in any one direction. We took in the bounty of tracks locked in the clay and witnessed track evidence of everything from two mountain lions that had come down to the water to get a drink, to the countless tracks of bobcat, coyote, gray fox, javelina, three species of skunk, badger, black bear, beaver, pocket mouse, numerous shore birds and many others.

Days later, the Earth Native Tracking Intensive program worked to unlock the mysteries of these same trails and in the process learned one more way in which water is a tracker’s best friend; For the mighty Rio Grande kindly provided a relaxing place to cool off after many long hours in the desert sun deciphering the stories that the animals of Big Bend had left behind.